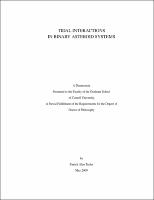 Tidal evolution in binary asteroid systems is examined with the dynamics extended to systems with close orbits within 5 radii of the primary component, non-negligibly eccentric mutual orbits, and a non-spherical primary component. The use of tidal evolution to determine the material properties of asteroids in terms of the product of the rigidity (shear modulus) and specific tidal dissipation function shows binary systems in the main belt with 100-km scale primary components are consistent with monolithic or fractured rock. Near-Earth binaries must either be much weaker mechanically than their main belt cousins, as one would expect for heavily fractured or rubble pile bodies, or have been formed in the main belt prior to injection to the near-Earth region. The most important factor in determining material properties of an asteroid in this manner is uncertainty in the age of the binary. The formation of contact binary systems where the two components are in physical contact and rotate as a single body is shown to be caused by the lack of a valid, stable, fully despun, double synchronous mutual orbit. Whether this lack of a tidal end state is caused during the formation process, with non-spherical components, or through the reduction of the angular momentum of the system via a spin-down mechanism, contact binaries are preferentially produced with components of similar size as is observed by radar. Radar observations of near-Earth asteroid 2004 DC show it to be a binary system with an eccentric mutual orbit and an asynchronous secondary that may be tumbling chaotically. The spin state, shape, angular momentum content, and mutual orbit of 2004 DC all indicate that the system was produced via a spin-up mechanism such as the YORP effect. The 2004 DC binary likely formed in essentially its current configuration and has not evolved significantly due to tides.