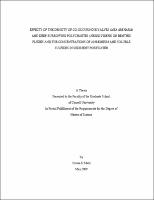 Increases in the frequency and severity of disturbance events, such as periodic hypoxia and trawling, have caused dramatic changes in benthic invertebrate communities in many coastal regions. In order to predict the effects of disturbance on ecosystem function, it is necessary to improve understanding of how changes in invertebrate density and species composition affect benthic geochemical cycling. I used laboratory microcosms to test the effects of recolonization of previously defaunated sediments by deep-burrowing polychaetes (Nereis virens) and suspension-feeding bivalves (Mya arenaria) on porewater ammonium and soluble-sulfide concentrations as well as benthic fluxes of oxygen and nutrients: dissolved inorganic nitrogen (ammonium and nitrate + nitrite, or DIN), dissolved silicate (Si), and soluble reactive phosphorus (SRP). I added single and two-species treatments including a range of densities comparable to densities common for shallow estuaries. I sampled porewater and measured fluxes under both dark and light conditions one month after organism addition. Effects of N. virens on porewater chemistry were significantly greater than M. arenaria, but even the lowest density of each organism lowered porewater ammonium and soluble-sulfide concentrations significantly relative to defaunated controls. However, increasing density had little additional effect on porewater. Benthic oxygen and nutrient fluxes generally increased between low and high densities. However fluxes of DIN and SRP were higher in controls than in lowdensity treatments and fluxes of SRP were significantly lower in N. virens treatments than M. arenaria treatments. This suggests that whether organisms would increase or decrease nutrient availability depends on density and that the ratio of DIN:SRP release depends on species composition. Macrofaunal respiration and excretion of ammonium and SRP appeared to account for most of the increased nutrient flux. Mya arenaria also stimulated significant increases in benthic gross primary production (GPP) and corresponding decreases in ammonium, SRP, and Si fluxes in the light relative to the dark. N. virens had no effect on GPP but enhanced both nitrate and Si flux significantly in the light, probably by increasing ventilation. Changes in porewater solute concentrations and benthic flux rates in two-species treatments were generally greater than expected based on single-species treatments, and the deviation of observed from expected values increased with density. This suggests that niche complimentarity could influence the effects of these organisms on elemental cycling and that effects become more important with increasing density.