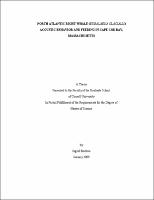 Many species use acoustics for communication including whales, birds, elephants, frogs, primates, and insects (Payne 1971; Narins and Capranica 1978; Poole, Payne et al. 1988; Brown 1991; Hauser 1993a; Hauser 1993b; Hoy 2002). This study examines whether North Atlantic right whales (Eubalaena glacialis) use acoustic communication to advertise the availability of their primary prey, Calanus finmarchicus, a species of zooplankton. The North Atlantic right whale, a species numbering approximately 350 individuals, is one of the most endangered whales in the world (Clapham 1999). Currently the functional significance of right whales producing contact calls in the context of searching for food and feeding is not understood. The research described in the following pages is directed at exploring the relationship between North Atlantic right whale acoustic and feeding behavior. The acoustic data for the Cape Cod Bay (CCB) right whale acoustics and feeding research project has been collected using marine autonomous recording units (MARUs) developed by Cornell University (Clark 2002). The research focuses on the hypothesis: North Atlantic right whales acoustically advertise food resources, thereby practicing reciprocal cooperation. The prediction following this hypothesis is: Within a given area, zooplankton density will be correlated to right whale call number. The alternative hypothesis is: North Atlantic right whales do not acoustically advertise food resources nor participate in reciprocal cooperation. The prediction following the alternative is hypothesis: within a specific area, zooplankton density will not be correlated to right whale call rate. My research focuses on North Atlantic right whale activity in CCB from January through May, where approximately one quarter of the right whale population is found during this time {Urazghildiiev, 2007 #282; C. W. Clark, 2007 #282}. In order to complete this research project, I have been granted access to two rich data sets: acoustic data collected by the Cornell University Bioacoustics Research Program (BRP), the program in which I am a student; and zooplankton data collected by the Provincetown Center for Coastal Studies (PCCS). The results from the models run during the project?s analyses support the alternative hypothesis that North Atlantic right whales do not acoustically advertise food resources. However, some of the models demonstrated that year has an effect on call numbers when only 2003 and 2006 are compared, suggesting that year may be indirectly related to zooplankton density.