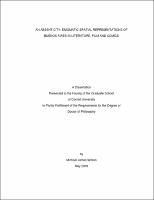 The objective of this dissertation is to analyze uncanny and enigmatic manifestations of space in representations of Buenos Aires. This analysis delineates the metaphysical nature of the spaces described and enables me to formulate an epistemic negative of urban ontology. The primary focus of this approximation is the enigmatic representations of Buenos Aires found in narrative, comics and film. I employ the term 'enigmatic' to describe urban phenomena that do not fall within the expected and logical behavior of spatial configuration within an urban matrix. While the causality and volition of these phenomena remains hidden due to their metaphysical nature, the observable events that manifest themselves in the representations allow an approximation to that which is not analyzable. The combination of the observable events assembles to create an ontological silhouette or epistemic negative. This dissertation will analyze three different phenomena in particular that are reiterated frequently within enigmatic representations of Buenos Aires: (1) inescapable cities, (2) shadow cities and (3) anthropomorphic and topomorphic cities. Inescapable cities are those that confine the inhabitant within Buenos Aires due to a number of phenomena; from labyrinthine topologies and infinite mathematical systems to limitless urban matrixes that repeat themselves unendingly. Shadow cities are the doppelgangers of urban space; spaces that share uncanny similarities and traits that trigger recognition, but the cognitive process remains incomplete. Shadow cities can be stable and palimpsestic, as well as unstable and anachronistic. Anthropomorphic cities are those that acquire certain characteristics of their inhabitants, whether it is physiological or psycho-topological. In the case of topomorfosis, the process and ontological flow is reversed; the inhabitants acquire spatial traits. In this manner the individual acts as an anthrotopological record, registering aspects such as volition and the extension of urban representation.