The Social Context Of Tertullian's "On The Veiling Of Virgins" 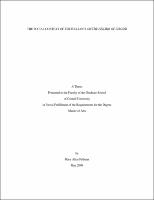 The theologian Tertullian (c.160-c.230 CE) was a prominent voice in early western Christianity, writing extensively about women. This thesis seeks to analyze his views on women as expressed in the treatise De virginibus velandis (On the Veiling of Virgins) and to situate these views in their greater Roman context. This analysis focuses on contemporary Roman, non-Christian attitudes toward women, including biological and social perspectives, rather than theology. The thesis contextualizes Tertullian's beliefs and offers specific examples of both incidences where elements of his thought may be traced, directly and indirectly, to contemporary non-Christian ideas, and places where that thought is in dialogue with or explicitly rejecting those ideas. The research here suggests that Tertullian was both influenced by Roman, non-Christian intellectual culture and explicitly rejected aspects thereof. Future analyses of his work should therefore acknowledge and utilize both Christian and non-Christian sources. Chapter One offers a brief examination of the relevant historiography. Chapter Two outlines the controversy in De virginibus velandis: whether or not virgins in the Carthaginian church should be veiled. Chapter Three discusses GrecoRoman philosophy and science and possible effects on Tertullian's arguments in De virginibus velandis. Chapter Four addresses Tertullian's development of a philosophy of womanhood which introduces specifically Christian elements of sexual shame and mature women as a threat to the continence of men. Chapter Five examines the Roman cultural significance of women's behavior and apparel, particularly veiling.