Rituals Of Ethnicity: Migration, Mixture, And The Making Of Thangmi Identity Across Himalayan Borders 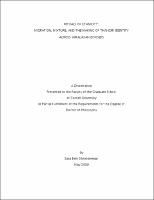 This ethnography examines the relationships between political discourse, ritual practice, cultural performance, and circular migration in producing ethnic identity for the Thangmi, a Himalayan community dispersed across border areas of Nepal, India, and the Tibetan Autonomous Region of China. With a population of approximately 40,000, the Thangmi speak a distinct Tibeto-Burman language, and maintain a religious system which draws upon aspects of shamanic, Hindu and Buddhist practice in a synthetic manner. This dissertation shows how Thangmi subjectivities are forged in a transnational dialectic between discursive statements of cultural absence and ritualized expressions of cultural presence, prompting a reconceptualization of how both ethnicity and ritual work within contexts of mobility. The Thangmi have been almost entirely absent from lay, political, and academic discourses on ethnicity in all three of the national contexts in which they live. There are no previous substantive ethnographic publications on the group. Yet many Thangmi view ethnography as a valuable asset within the politics of recognition, so beyond its theoretical imperatives, this dissertation is intended as a documentary resource for the community. As such, it demonstrates the continued value and complicity of ethnography in serving both academic and political agendas. This dissertation explores the history of Thangmi migration from Nepal to India and the TAR, and illustrates how contemporary crossborder movements bring members of the Thangmi community into contact with three different national policies for recognizing minorities and legislating difference. The dissertation describes Thangmi participation in the broader janajati, or 'indigenous nationalities', movement in Nepal, as well as their campaign for government recognition as a 'Scheduled Tribe' within India's reservations system. This work is based primarily on ethnographic research conducted in Nepal's Dolakha, Sindhupalchok and Kathmandu districts; the Indian states of West Bengal (Darjeeling District) and Sikkim; and China?s Tibetan Autonomous Region (Nyalam County). It also draws upon textual and multi-media sources. The resulting analytical approach bridges depictions of ethnicity as a political construction dependent largely on discourse, and those of identity as a subjective production dependent largely on practice, to offer an empirically rich study of contemporary ethnic identity as lived in a cross-border environment.