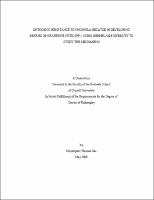 Berries of several grapevine (Vitis spp.) species develop resistance to the powdery mildew fungus Uncinula necator, as they age, becoming resistant within approximately two weeks after bloom (ontogenic resistance). Ontogenic resistance is of interest to uncover new avenues of disease management and to expand our knowledge of fruit development. Several studies were developed to advance this goal. A screen of wild Vitis spp. and interspecific hybrids was conducted to identify and describe phenotypic variation. This project was successful in both expanding our understanding of the population dynamics of ontogenic resistance and in identifying genotypes with suitable variation for a hypothesis-driven examination of berry cuticle development and for a discovery-science oriented investigation of protein expression of berry peels correlated to the gain of resistance. The protein expression profiling was successful in identifying 142 proteins differentially expressed during early berry development from four selected genotypes of Vitis, including 45 whose expression most closely associated with the gain of resistance. Overall, these proteins are enriched for biological functions involved in metabolism, cell regulation and proteolysis. Fifty-five sequences in the newly released V. vinifera genome were also newly annotated for function, further improving this emerging genetic resource. The studies into the development of the berry cuticle as it relates to ontogenic resistance were successful in showing that both epicuticular wax chemistry as well as the surface topology are possibly involved in the gain of resistance. These studies have propelled our understanding of this potentially useful form of host resistance, which could eventually lead to new practices of disease control in the vineyard resulting in better disease control and less environmental impact.