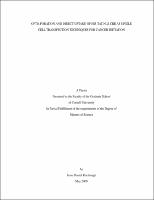 Two potential methods to excise genes in a single cell by inserting Cre Recombinase into its nucleus are described here. Optical transfection using a femtosecond laser was found to be effective at getting dyes into cells, but because of issues with spontaneous transfection and cell death, was inadequate as a method to introduce plasmids into cells. Direct delivery of His-NLS-TAT Cre with a micropipette was able to excise the DNA in a small number of cells without causing significant damage to them. It however was unable to reproducibly localize the location of the cells produced to less than a 600 micron diameter circle on the plate.