Portfolio of Compositions: "To Undo This Knot of the Night, I Hear the Sound of Trees" (Part I) 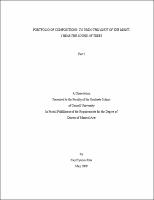 Unsuk Chin's (1961 - current) music started to receive a European recognition in the mid-1990s with her chamber work Akrostichon-Wortspiel and the 2004 Grawemeyer Award-winning Violin Concerto has brought her attention in North America as well. Still considered somewhat of a recent discovery, listeners and critics have been intrigued by the composer whose musical origin is multifaceted. While trained in the Darmstadt school, Chin demonstrates a facile application of diverse musical traditions, classical and ethnic. The dissertation attempts to introduce the composer's life and works so far, and to investigate the compositional process focusing on the topics of micro- and macro-rhythm in the composer's recent works. The first chapter lays out a broad view of the composer's development - her early musical training in South Korea to her current musical activities taking place mostly in Europe where the composer has resided since the 1980s. The chapter will also discuss the composer's general aesthetic styles and concerns. The second chapter isolates the local rhythm evident in her recent works - Violin Concerto, Double Concerto and Cantatrix Sopranica , especially the repetitive ostinato technique and the concept of stasis inspired by the Balinese gamelan music. The third chapter investigates the larger phrase rhythm and formal scheme in the same three works, focusing on still the concept of repetition, but growing by addition of blocks and layers.