States Of Peace, Suppliers Of War - The Emergence Of Conventional Arms Export Restraints 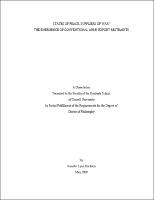 Why, despite long-standing concerns for sovereignty, economics, and foreign policy, have states begun to pursue 'responsible' arms export controls? This dissertation examines state initiatives to regulate the flow of conventional weapons to countries engaged in massive human rights violations or violent conflict. First, I include a unique cross-national statistical analysis of the export behavior of 22 small and major conventional arms supplier states from 1981-2004. The analysis explores the influence of human rights, conflict, democracy, and embargoes on the export practice of top supplier states. Second, I use case studies to examine the domestic and international politics of transfer control in five of the world's top arms exporters: Belgium, Germany, France, the United Kingdom, and the United States. Based on extensive fieldwork, I argue that states' concerns for reputation and image in international politics are central to their acceptance of new export standards amidst changing norms of humanitarian arms control policy. Beyond new policies, however, changes in export practice are slower to emerge and closely linked to governments' reputational damage wake of arms export scandals. I find that growing arms trade transparency and an active domestic NGO community together challenge states to proceed with exports more cautiously by heightening their scandal sensitivity. I conclude that the effects of policy commitments in international fora and democratic accountability in domestic politics can begin a dynamic in which supplier states implement policies designed to enhance security and human rights outside their borders and around the world.