Synthesis Of Dna-Templated Functional Materials And Their Applications 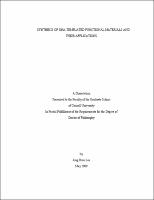 DNA has been used to guide the self-assembly of functional materials in this dissertation. Based on programmability of DNA, Y-shaped DNA (Y-DNA) and Xshaped DNA (X-DNA) were precisely labeled with fluorescence and quencher dyes. From these precise labelings, the stability of Y- and X-shaped DNA was studied by the Forster resonance energy transfer (FRET) method. In addition, the thermal stability of DNA nanostructures self-assembled from Y- and X-shaped DNA was thoroughly investigated. The nanosurface energy transfer (NSET) method was employed to monitor the conformation change of the nanostructures with nano-scale sensitivity. The effects of junctions on the thermal stability dendrimer-like DNA (DL-DNA) and DNA hydrogel were also studied with various types of FRET pair labeled building blocks. Based on the multivalency and anisotropicity of DNA nanostructures, DNAtemplated assembly of multifunctional nano-architectures was achieved. By ligation of branched DNA labeled with quantum dots, gold nanoparticles, and polyethylene glycol monoacrylate, anisotropic, branched, and crosslinkable monomers (ABC monomers) were created. Because of the precise labeling of multi-moieties on a single entity, DNA nano-architectures showed multifunctions such as optical coding, amplifying signal by polymerization, and detecting pathogen DNA. A target-driven polymerization by the ABC monomer achieved highly-sensitive pathogen detection. In addition, the polymers were used as a biocompatible multi-drug delivery vector. DNA-templated technology was applied in generating a novel functional DNA hydrogel. The formation of the gel was based on physical interactions of elongated DNA strands by rolling circle chain reaction (RCCR). Unlike traditional DNA based hydrogel, this novel DNA hydrogel was thermally stable, since it did not depend on base pairing. The new DNA hydrogel behaved like fluid but still held a specific shape and gel properties. In addition, the hydrogels showed thermoplastic property which allows hydrogel to be easily reshaped by molding and heating. With these excellent characteristics, our liquid-like DNA hydrogels were developed as an injectable extracellular matrix for tissue engineering.