Identification Of Dragon, A Novel Member Of The Sma/Mab Tgf Beta Signaling Pathway In Caenorhabditis Elegans 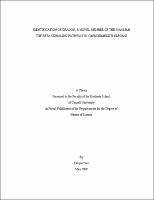 The C. elegans postembryonic lineage, the M lineage, gives rise to mesodermal cell types: body wall muscles, sex muscles and coelomocytes. Past research in the Liu lab has shown that SMA-9, the C. elegans homolog of Drosophila Schnurri, is required for establishing dorsoventral asymmetry in the M lineage, and that it does so by antagonizing the Sma/Mab TGF-? signaling pathway. To identify additional factors involved in regulating dorsoventral asymmetry, our lab has screened for mutations that suppress the M lineage defects of sma-9 mutants. Using snip-SNP mapping, I have mapped one of these suppressor mutations, jj4, and identified it to be a mutation in Y71G12B.16, the hitherto uncharacterized C. elegans homolog of DRAGON. DRAGON belongs to the well-conserved RGM family of proteins, members of which have been shown to act as coreceptors for BMP signaling in mouse and Xenopus. Furthermore, I have conducted epistasis studies to place dragon in the context of the Sma/Mab TGF-? signaling pathway, as well as designed constructs that would help shed light on the temporal and spatial expression patterns of dragon. Additionally, I have designed and made fusion protein expression constructs, which can be used to generate antibodies against DRAGON. 13