Effects Of Light On The Feeding Interactions And Spatial Distributions Of The Opossum Shrimp, Mysis Relicta, And The Alewife, Alosa Pseudoharengus, In Lake Ontario 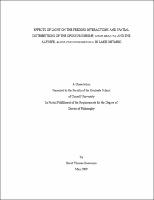 The opossum shrimp, Mysis relicta, is a primary predator on zooplankton and both a nutritious prey item for and competitor with planktivorous fish, including the alewife (Alosa pseudoharengus), in Lake Ontario. The primary objective of this study is to determine the extent to which spatial overlap and the strength of feeding interactions between mysids and alewife are influenced by the amount of moonlight entering the water column at night. My approach was to study light effects on alewifemysid feeding dynamics on a variety of different scales ? from the absorption of visual pigments in the retina to behavioral experiments in the laboratory to modeling analyses and field distributions in Lake Ontario. A laboratory-based light preference function for adult mysids, in units derived from the spectral sensitivity of the mysid eye, or ?mylux? units, was used in combination with an adult mysid temperature preference function to build a model of mysid vertical distribution. This model accurately predicted the vertical distribution of mysids in Lake Ontario on twelve different field sampling occasions between 1995-1996 and 2004-2005. Although laboratory-based temperature and light preferences of juvenile mysids differed from those of adults, the response of adult mysids to temperature and light alone appears to be sufficient to predict mysid vertical distribution across different seasons and moon phases in Lake Ontario. A series of laboratory and field experiments with alewife and M. relicta demonstrated that the light levels associated with the upper edge of the mysid distribution on a full moon night were within the range of those used by alewives to enhance their feeding rates on mysids in the laboratory, but not on a new moon night. Gut content analyses of alewives caught within the mysid layer revealed a greater than 30-fold increase in mysid consumption on the full moon night despite a lower degree of overlap between the two trophic levels, indicating that increased light penetration leads to higher feeding rates of alewives on mysids. These results are significant given that increases in water clarity in Lake Ontario associated with oligotrophication has led to light being more often limiting to mysid distributions than in earlier decades, which, in turn, has led to a better visual foraging environment for alewives. This study is one step towards a better understanding of one of the most central feeding relationships in Lake Ontario and provides insight into how pelagic food web dynamics may be affected by ongoing ecological change.