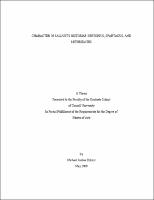 This thesis is an examination of the characters of Sertorius, Spartacus, and Mithridates in Sallust's Historiae. The fragmentary state of the Historiae and the general lack of scholarship on Sallust in English and French have left much room for study. Chapter One serves as an introduction to Sallust, his writing, and the state of Sallustian scholarship on the question at hand. Chapters Two, Three, and Four, one dedicated to each figure, attempt to reconstruct as far as possible Sallust's conception of these three men by a close reading of the fragments and then by comparing the fragments with later historians who use Sallust as a source, primarily Plutarch and Appian. The fifth chapter investigates the roles of Catiline and Jugurtha in their respective works as a basis for comparison. The Conclusion, Chapter Six, argues for the individuality of all the figures. Each person does set himself against Rome and reveals the corruption therein, but the precise nature of that role and their dominant characteristics vary. The thesis also suggests the development of Sallust as an historian, since the completely villainous figures of Catiline and Jugurtha give way to the more measured depictions of the Historiae.