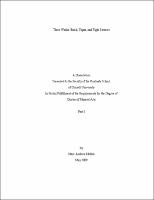 Music for 18 Musicians was composed by Steve Reich between the years of 1974-1976. The work has become a hallmark of the genre of minimalism and has enjoyed performances throughout the world. It is quite possibly Steve Reich?s best known work though very little compositional analysis has been published on this music. This is largely due to the fact that no full score has previously been published or even available. The piece was written with specific performers in mind, and performed by these same players until about 1986. These musicians worked closely with Reich as he composed the work, with the composer teaching the musicians much of the music by example. No full score or full set of parts was ever notated or written down. Instead, Reich kept a musical notebook where he would write down the musical processes for each player in musical shorthand. The music was eventually almost memorized, and could then be performed by these same players using only these shorthand parts. Once the original performing group, ?Steve Reich and Musicians,? ended their initial performance run, the work was not performed again for more than 20 years. Without a score and parts, no other musical ensembles could perform it; there were no performance materials in any traditional sense. My first task in analyzing this work was to create such a score. Using the original 1976 ECM recording of the work (ECM New Series 1129) as my primary source, together with Steve Reich?s own excellent sketch of sections I-VI of the piece and the original performer?s shorthand parts, I was able to fully notate the entire work as it existed on recording. Once I had notated the entire CD, I then engraved a more advanced score that fully represented the piece, along with a set of parts for performance. This entire process took me approximately two years. Once the final score and set of performance parts were complete, the work was published by Boosey and Hawkes, and performances could then occur worldwide. This music enjoys performances around the globe thanks to the creation of the score and parts.