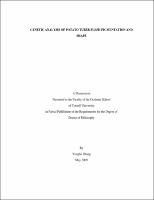 Diploid potato clone 10618-01, which has partially pigmented flesh, was crossed with diploid 320-02, which has white flesh. QTLs influencing extent of flesh pigmentation were detected on chromosomes 5, 8 and 9. The potato homolog of Petunia an1, a bHLH transcriptional regulator of anthocyanin biosynthesis, was found to co-localize with the QTL on chromosome 9. A CAPS marker based on this gene was used to evaluate a collection of 21 tetraploid potato clones with highly or fully pigmented flesh, as well as 53 cultivars with white or yellow flesh. All pigmentedflesh clones shared a marker allele that was present in only 21 of the 53 white and yellow clones, suggesting that a common bHLH allele contributes towards, although not sufficient for, pigmented tuber flesh in cultivated potato. It was previously reported that dfr co-segregates with R. To test directly whether R corresponds to dfr, the allele of dfr was put into the potato cultivar Prince Hairy (genotype dddd rrrr P----), which has white tubers and pale blue flowers. Transgenic Prince Hairy tubers remained white, but flower color changed to purple. Three independent transgenic lines, as well as a vector-transformed line, were then crossed with the red-skinned variety Chieftain (genotype D--- R--- pppp), to establish populations that segregated for D, R, P, and the dfr transgene or empty vector. Progeny carrying the empty vector in the genetic background D--- rrrr produced white or purple tubers, while progeny with the same genotype and the dfr transgene produced red or purple tubers. HPLC and LC-MS/MS analyses revealed no qualitative differences. Thus, dfr can fully complement R, both in terms of tuber color and anthocyanin composition. The last chapter adds to knowledge about potato tuber shape. In addition to confirming the known Ro locus on chromosome 10, which explained 55% or more of the variation for ratio of tuber length to width, we identified a novel QTL, ts5.1, which explained 8.9% of the variation. CAPS marker CT217 was found to be tightly linked with Ro in the diploid population. Evaluation of a panel of 84 tetraploid potato varieties with CT217 revealed a banding pattern highly correlated with long tuber shape. An anatomical comparison of round versus long tubers revealed that long tuber shape results from an increase in cell number, rather than an increase in cell length, along the longitudinal axis.