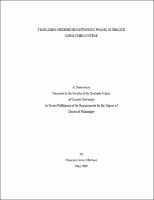 A combination of coarse-grained particle-based molecular simulations and selfconsistent field theory (SCFT) were used to detect and circumvent the packing frustration responsible for the very limited stability of the bicontinuous phases in DBC systems. Such bicontinuous phases have promising applications in many technological areas like: solar-cells and photonic crystals. Lattice and continuum Monte Carlo simulations together with Molecular Dynamics were used to map out the phase diagram of the pure DBC melt. The morphologies observed were found to be dependent upon the size of the simulation box because of severe finite-size effects caused by the long-range periodicity of this type of systems. Thus, accurate free energy calculations, achievable only through Expanded Ensemble methods, were needed to discern the stability of the competing mesophases at each thermodynamic condition. The gyroid (G) phase was found to be stable in a narrow region of phase diagram. Direct evidence of packing frustration in the form of chain-stretching was found in the G phase nodes for all the models studied. Chain-length bidispersity was then investigated as a means to reduce such packing frustration; it was found that the preferential segregation of the longer chains inside the G phase nodes caused an increase in the range of temperatures where the G phase was stable. As an alternative strategy to diminish packing frustration, addition of minority-component homopolymer, was studied at the conditions were the G phase was found stable in the pure DBC system. The progression of morphologies G ? C ? Double Diamond (DD) ? Plumber?s Nightmare (P) was observed upon increasing homopolymer content. The homopolymer concentrated in the nodes of the DD and P phases to reduce the packing frustration. Though tentative phase boundaries were delineated via free energy calculations, macrophase separation could not be satisfactorily assessed within the framework of particle-based simulations. Thus, SCFT was used to explore in more detail the DBC/homopolymer phase diagram, showing that, although in many cases two-phase coexistence of a DBC-rich phase and a homopolymer-rich phase precedes the stability of complex bicontinuous phases, the DD and P phases can indeed be stable in some regions of the phase diagram.