Studies On The Physical Arrangement And Structure Of The Escherichia Coli Nucleoid: Implications For Synthetic Genome Design 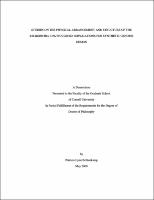 A goal in synthetic biology is the design and construction of an artificial bacterial cell - a functional organism capable of completing some pre-defined task, such as producing therapeutics or decontaminating waste streams. There are several factors that must be considered in synthetic organism design for biotechnological applications, namely: a resilient cell structure, robust cell reproduction, and low mutability. Escherichia coli possess many of these characteristics and could serve as a useful model organism for the design and construction of a synthetic organism. To investigate whether gene organization affects gene expression during the cell cycle, transcript levels of 58 genes in E. coli B/r A were determined at five times during the cell division cycle. Approximately 17% of the transcript levels were cell cycle dependent. These genes were divided into two classes: genes displaying increased transcript concentrations following gene replication and genes displaying an increased transcript concentration prior to replication initiation. Transcripts levels for hns, uspA, and zwf were affected by the cell division cycle, but did not fit well into either class. These results indicated that transcription of a significant fraction of the genome was affected by replication cycle progression. Therefore, gene position, with regard to the C period, and gene function are important factors to incorporate into design criteria for synthetic bacterial genomes. The shape and compaction of the bacterial nucleoid may affect gene accessibility to transcriptional machinery in natural and synthetic systems. The nature and contribution of RNA- and protein-based forces to nucleoid compaction in Escherichia coli were investigated. The results indicated that removal of RNA from the bacterial nucleoid affected nucleoid compaction by altering the branching density of the nucleoid macromolecular structure. Brij 58 served as a macromolecular crowding agent in nucleoid isolations and RNA-free nucleoids adopted a compact structure similar in size to exponential-phase nucleoids when the Brij 58 concentration was increased. In addition, control and protein-free nucleoids behaved similarly in solutions containing a macromolecular crowding agent, indicating that the contribution to DNA compaction by nucleoid-associated proteins was small when compared to macromolecular crowding effects.