Multifunctional Fetishism: Neoliberal Restructuring And The Valorization Of European Agriculture 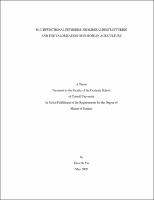 This thesis conceptualizes the transformation of food from a source of cultural and social reproduction into a commodity for speculation and bargaining as a central component of neoliberal agricultural reforms. Within this framework, I underscore how the emergence of market-based strategies for the valorization of agricultural multifunctionality in Europe has deepened the subjection of agriculture and food to circuits of capital accumulation, rather than promoting the development of ecologically sustainable and socially embedded farming systems. In particular, I analyze how the strategic deployment of a Euro-centric notion of multifunctionality has allowed for the retention of subsidies decoupled from production which are compliant with WTO demands of trade liberalization and benefit large producers and food industries operating on a world scale. Correspondingly, I argue that the discourse of multifunctionality promoted by the EU is closely associated with the deployment of neoliberal concepts of self-help, social capital, and value-adding which seek to justify the contested withdrawal of the state from the provision of public support to small scale producers. As such, the commercialization of agriculture?s multiple functions has become a focal site of resistance for farmers? movements and rural communities across Europe advocating for an alternative model of agricultural development premised on the notion of food sovereignty. In this respect, the thesis concludes by focusing on forms of agrarian politics which seeks to transcend the structural contradictions of the neoliberal project of agricultural restructuring by re-embedding agriculture and food in their social and ecological foundations.