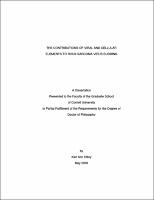 The efficient release of newly assembled retrovirus particles from the plasma membrane requires the recruitment of a network of cellular proteins (the ESCRT machinery) normally involved in the biogenesis of multivesicular bodies (MVBs). It is known that retroviruses, as well as other enveloped viruses, recruit this ESCRT machinery through short motifs termed late domains. Retroviruses use three classes of late domains as docks for the ESCRT machinery: PT/SAP, PPXY, and LYPXnL. The major late domain of Rous sarcoma virus (RSV) has been mapped to a PPPY motif in Gag that binds members of the Nedd4-family of ubiquitin ligases. RSV Gag also contains a second putative late domain motif, LYPSL, positioned five amino acids downstream of PPPY. LYPXnL motifs have been shown to support budding in other retroviruses by binding the ESCRT adaptor protein Alix. To investigate the role of this LYPSL motif in RSV budding I measured budding rate and spreading rate, and examined the budding phenotypes with scanning electron microscopy of various PPPY and LYPSL mutants in the context of infectious RSV. Typical of late domain phenotypes, SEM showed an increase number of particles in the process of budding on the plasma membrane when the LYPSL motif was mutated to AAASA. I found that mutating the LYPSL motif alone caused a moderate reduction in the budding rate of RSV. However, the role of the LYPSL motif in budding and spreading was amplified when the primary PPPY late domain was fully or partially mutated. In this same context I also showed that the related equine infectious anemia virus LYPDL motif acts as a stronger late domain than the LYPSL. Furthermore, I found that the over-expression of Alix increases the budding and spreading rate of wild-type and late domain mutants, especially PPPY mutants in which the LYPSL motif remains intact. Taken together these results support a model of RSV budding in which the LYPSL motif acts as a secondary late domain via its interaction with Alix.