Mercury At The Terrestrial-Aquatic Interface: The Biogeochemical Cycling Of Mercury In Wetlands Of Different Hydrogeologic Setting, And During Snowmelt In A Forested Headwater Stream 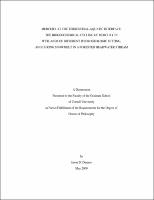 Anthropogenic emissions of mercury into the atmosphere have increased mercury deposition that, in turn, has led to a large legacy of mercury accumulation in terrestrial ecosystems and increased mercury contamination of surface waters. Despite efforts to control anthropogenic emissions of mercury, it is possible that release of mercury historically deposited to forests and wetlands will moderate the recovery of aquatic ecosystems. This research examined the biogeochemical cycling of mercury in different wetland types in the Adirondack region of New York and in a forested headwater catchment during snowmelt at the Hubbard Brook Experimental Forest (HBEF) in the White Mountains of New Hampshire. Mercury pool size varied across the upland-wetland interface, among wetland types, across individual wetland transects, and along depth profiles in soils of forests and wetlands of the Adirondack region. In mineral horizons of uplands and shallow peat riparian wetlands, mercury was strongly correlated with carbon (p=0.002, r2=0.73), and nitrogen (p less than 0.001, r2=0.82), but not sulfur. In contrast, there was a strong correlation between mercury and sulfur in peat of headwater wetlands (p less than 0.0001, r2=0.60). Flux estimates suggest a mean residence time of 590 years (SE = 69) for mercury in headwater wetlands and shallow peat riparian wetlands, and greater than 10,000 years in deep peat riparian wetlands. Concentrations of mercury and methyl mercury in wetland peat porewater and streams varied seasonally and among wetland types. Differences in mercury:carbon stoichiometry among wetland types suggested that the supply of mercury was limited relative to DOC binding sites in headwater wetlands, whereas mercury:carbon ratios converged toward a maximum in riparian wetlands, a condition suggestive of mercury saturation. High dissolved methyl mercury concentrations in peat porewater occurred at low nitrate concentrations (p less than 0.0001), suggesting redox reactions associated with nitrate can inhibit microbial methylation of mercury. At the HBEF, dissolved organic carbon mobilized from shallow organic soils during snowmelt resulted in the mobilization of mercury from these same sources. Overall, this research on the biogeochemistry of mercury highlights the linkages between hydrological processes and organic matter dynamics that function as master variables influencing the ultimate fate of a large legacy of mercury accumulation in forest and wetland ecosystems.