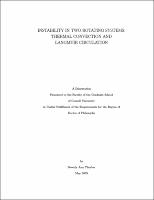 In this dissertation, two related problems are considered: rotating Rayleigh-Benard convection and Langmuir circulation with thermal effects. These two phenomena can be modeled using similar equation systems because convection rolls and Langmuir circulation windrows are physically similar, although the two driving processes differ. The first part of this dissertation is concerned with rotating convection, for which fully three-dimensional amplitude equations are derived for both stationary and Hopf bifurcations. These take the form of one equation (stationary bifurcation) or two coupled equations (Hopf bifurcation) of the Ginzburg-Landau type, coupled to an additional equation for the mean drift. The coefficients of the Ginzburg-Landau type equation(s) are derived analytically for systems with stressfree boundaries that undergo stationary and Hopf bifurcations and numerically for systems with rigid boundaries that undergo stationary bifurcations. Criteria for the stability of a single traveling wave solution are given. In the second part of this dissertation, the effect of thermal variations on Langmuir circulation is considered. Results of the linearized problem are presented and show how the critical values vary with latitude and wind direction. Stable temperature stratification, represented by a negative Rayleigh number, makes it more difficult for Langmuir circulations to form, as shown by an increase in the critical Reynolds number. However, in all cases considered, Langmuir circulations were able to form. Changes in latitude and wind direction do not significantly alter the critical values. The patterns formed by Langmuir circulation are described using a multi-mode model based on the results of the linear problem. Slightly above critical, a band of unstable modes interacts to form patterns on the ocean surface. These patterns are shown to have Y-junctions at points where the temperature perturbation is zero. In the temperature field, the orientation of the Y-junctions is biased downwind.