A biography of and interview about Isidor I. Sprecker 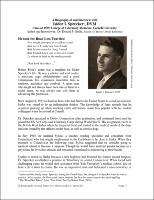 The son of Russian Jews who had fled to the United States to avoid persecution, Isidor Sprecher (he later changed his name to Sprecker for ease of pronunciation) was one of 40 graduates in Cornell's veterinary class of 1939. He initially practiced in Derby, Connecticut, then was called into service in the US British West Indies during WWII. Returning to Connecticut following the war, he opened a small animal practice in Waterbury. His deep devotion to veterinary education and research led him and his wife, Sylvia, to bestow upon Cornell a series of gifts that culminated in their being named Foremost Benefactors of the university. The Spreckers retired in Boynton Beach, Florida, where Isidor died in 2004 at age 90.