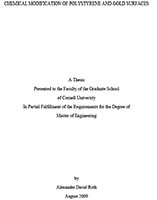 Investigations toward the surface modification of gold and polymers and the long-term storage of functionalized surfaces were carried out. First gold was modified with cystamine to see if amine functional groups could be formed on gold surfaces. Data were inconclusive as an acid orange 7 assay determined low amine group coverage but Schiff?s reagent (fuscin-sulfurous acid) test showed a subsequently higher aldehyde group coverage when coupling glutaraldehyde to the aminated surface. Second, biotin and Ru(bpy3)2+ were conjugated using NHS-ester and amine conjugation chemistry, however, no coupling was observed. Third, carboxylic acid groups were generated on polystyrene (PS) and polymethyl methacrylate (PMMA) using UV and ozone treatment and quantified using water contact angle to measure hydrophobicity, and utilizing a toluidine blue O assay for the carboxylic acid surface concentration. Long-term storage under various storage conditions including temperature, buffer components and pH were tested. An initial water contact angle of 42.0o and carboxylic acid group density of 12.4 nmol/cm2 were obtained for PS. In general, even under best conditions, an initial loss of functionality was observed reaching a steady state condition after 1 hour of storage. It was also determined that the temperature of storage did not affect hydrophobicity or carboxyl surface concentration. Samples stored in dry conditions maintained a significantly higher surface concentration than samples stored in 0.1 M phosphate buffer. PMMA retained 100 % surface functionality after heating up to 90oC, 95oC, and 100oC, while becoming more hydrophobic, indicating the loss of functional groups that are not carboxylic acid. Conversely, heated polystyrene did not become hydrophobic, but lost about 40% of its carboxyl surface groups. Samples coated with acetyl acetone were very hydrophobic, and carboxyl surface concentration was inconsistent. Hydrophobicity tended to increase with pH for HEPES, Tris, and sodium borate buffer, with water and Tris maintaining fairly hydrophilic surfaces (52.5-55.9o). However, the best carboxyl surface concentration was achieved on pH 5 and 7 water and pH 5 PBS. Thus, the best conditions for storage are dry stored conditions, acidic and neutral water, or acidic PBS buffer.