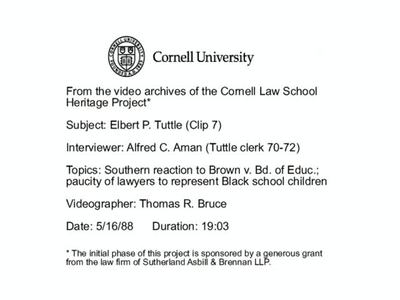 From the video archives of the Cornell Law School Heritage Project. The interviewer is Alfred C. Aman (Tuttle clerk 70-72); the videographer, Thomas R. Bruce. This video covers Elbert Tuttle's lack of appreciation of the degree of southern resistance that would be generated by Brown v. Board of Education when he was appointed to the Fifth Circuit, U.S. Court of Appeals in 1954, shortly after that decision, the nature of that resistance, and why implementing the decision through the lower federal courts proved so difficult. (Duration 19:03) The initial phase of this project was sponsored by a generous grant from the law firm of Sutherland Asbill and Brennan LLP.