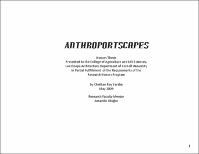 How does the airport alter the performance of a city? How does the airport plug into the larger landscape of an urban region? What meaning does the airport create for the millions of people who fly through often without pause? A web based survey was used to ascertain a wider scope of public views on airports as well as gathering opinions on some of the critical questions surrounding their future. Namely should the airport be connected to its local region, then should the airport be opened up as a citywide destination to the public [or non-passengers], and finally should the airport become a forum of social networking? Synthesizing these responses with different readings on airports as well as a variety of observations a framework for analyzing and designing these environments emerged. By considering earlier models in an attempt to understand the evolution of airport typologies and their connection to the urban landscape the concept anthroportscape was developed. The anthroportscape is the democratic, resilient, organic, and sustainable progressive evolutionary pathway of the airport. As the focus of this honors thesis investigation applying this urban design framework to the southern Indian city of Hyderabad yielded many fruitful speculations for sustainable development of the city and region. This further reinforced the conclusion that airports can drive sustainable urban development. Landscape architects mediating between multiple scales of development will play a critical role in airport design. This new paradigm of design will involve a broader spectrum of designers, planners, and thinkers.