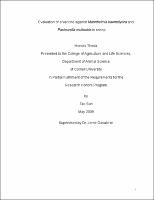 Of the 20 currently identified species in the genus Pasteurella, Mannheimia haemolytica and Pasteurella multocida are the most important respiratory pathogens affecting domestic ruminants, especially in sheep and cattle, together causing pneumonia. This disease is a leading cause of economic loss in the sheep industry. Factors such as transportation, viral infection, and overcrowded housing, may predispose the opportunistic infection by the pathogen. At present, several commercial vaccines have been developed to control pasteurellosis in sheep, including types such as bacterins, live attenuated, leukotoxin, capsule, lipopolysaccaride, subunit vaccines, sodium salicilate extract and potassium thiocyanate. Previous studies have shown that effective specific antibody response against M. haemolytica whole-cell antigen could be achieved via vaccination. However, for P. multocida, vaccines did not induce strong specific antibody response and some reports even suggested an increase in severity of infection by P. multocida after vaccination. In this study, the efficacy of an autogenous vaccine made from antigens from both M. haemolytica and P. multocida, was evaluated by measuring specific serum antibody titers produced against both bacteria in immunized sheep. Sera were obtained from all control (unvaccinated) and vaccinated lambs 1 week prior to vaccination and weekly for 3 weeks after vaccination. The results showed that the vaccine induced significant antibody response against M. haemolytica in both ewes and rams after 7 days post vaccination. For the response to P. multocida, specific antibodies were induced in ewes; however, the vaccine failed to stimulate specific antibody production against P. multocida in rams.