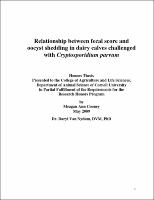 Cryptosporidium parvum is a zoonotic protozoan parasite commonly infecting dairy calves less than 30 days old. Infected animals display symptoms of diarrhea and shed approximately 107 oocysts / gram of feces. The objective of this study was to determine if there is an association between observed fecal score and oocyst shedding. A double-blinded, randomized trial was conducted using Holstein dairy calves. One of the study personnel was present at all births to transport calves to isolation barns where they were housed for 42 feedings (21d). Calves received 4L of colostrum during their first 12 hours of life and were inoculated with 1.0 x 106 oocysts of C. parvum 1-3 hours after the second feeding. Fifty three calves were enrolled in the study (four lost to follow up) and randomly assigned to one of two treatment groups (group 1, n= 25; group 2, n= 24) of a proprietary prophylactic. Each treatment group was analyzed independently. Fecal scores were assigned at each feeding on a scale of 1 to 4, with the higher number indicating increased severity of diarrhea. Fecal samples were collected once daily and analyzed for the presence of C. parvum oocysts using the Merifluor Crypto/Giardia immunofluorescence antibody assay. Normal excretion patterns of C. parvum were observed and results showed that both treatment groups had a statically significant relationship between the number of oocysts shed in normal feces versus diarrhea. There was no statistical difference in either group for the number of oocysts shed in mild versus severe diarrhea, although the mean number of oocysts shed was increased.