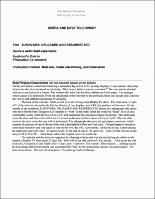 On the web and in a retail store featuring a networked big screen LCD, an array displays 31 one-minute video clips of persons who have answered an ad asking, "Why do you believe you are a survivor?" The man who is attacked with an ax and locked in a freezer. The woman who must feed her four children on food stamps. The teenager whose cancer is in remission. From the sensational to the everyday to the profound, these one-minute clips confront the viewer with different definitions of surviving. The look of the web site: Slick, as if it were advertising a real Reality TV show. The retail store, a "spin off" of the web site, located in the Fairfax District of Los Angeles, near CBS (the producer of Survivor). On the outside of the storefront: SURVIVORS: UPLOADED AND RESURRECTED Inside, two salespeople (the artists who have moved from Chicago to Los Angeles to "work" at the store) invite the would-be "buyer" in to sit on a comfortable couch, watch the big screen LCD, and manipulate the attached computer keyboard. The participant views the clips and then votes which survivor must go because his/her trauma isn't up to snuff. (The one who receives the most votes that day will be jettisoned.) The salespeople then give the participant a souvenir, which consists of a picture of one of the survivors and a description of their survival story. The participant is invited to come back tomorrow and vote again or vote on the web (the URL is provided). At the end of day 1 after tallying the retail store and web votes: 30 survivors left. At the end of Day 2: 29 survivors. From 31 little screens on the array to 30 to 29 to 28... black boxes where the original survivors used to be.