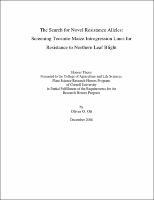 There has been little prior work done evaluating the potential of teosinte as a source of novel disease resistance to fungal pathogens. Teosintes are the ancestors of domesticated maize (Zea mays ssp. mays). All species of teosinte can form hybrids with maize, of which crosses of maize with Z. mays ssp. mexicana and parviglumis are the most common and fertile. For this study, a set of near isogenic lines (NILs) derived from five teosinte accessions were used to examine resistance to the northern leaf blight (NLB), caused by Exserohilum turcicum. The objective was to identify chromosomal segments introgressed from teosinte that affect the level of disease resistance when compared to the recurrent parent B73. Teosinte-maize introgression lines with enhanced resistance to NLB were identified, for both incubation period (IP) and area under the disease progress curve (AUDPC). Some of the more resistant lines indentified contain teosinte introgressions in locations that correspond to previously identified NLB QTL. Several lines with lesion types distinct from B73 for overall lesion size, the extent of purple coloring around lesions and other characteristics were also noted. Further work is needed to determine whether introgressions at recognized QTL loci carry alleles that are not found in maize germplasm pool. Work is also needed to determine whether teosinte chromosomal introgressions, which have not previously been associated with resistance, contain novel resistance QTL.