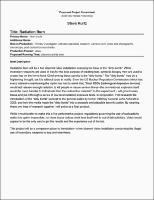 Radiation Burn will be a two channel video installation exposing the hoax of the "dirty bomb." While incendiary weapons are used in Iraq for the sole purpose of creating fear, symbolic boogey men are used to create fear on the home front. Chief among these spooks is the "dirty bomb." The "dirty bomb" may be a frightening thought, but it is without basis in reality. Even the US Nuclear Regulatory Commission (which has every interest in maintaining the myth) has had to admit that, "Most RDDs [radiological dispersive devices] would not release enough radiation to kill people or cause severe illness--the conventional explosive itself would be more harmful to individuals than the radioactive material." In this experiment, I will grow human tissue and put it through a series of low-level radiation exposure tests. In conjunction, I will research the introduction of the "dirty bomb" concept to the general public by former Attorney General John Ashcroft in 2003, and how the media made the "dirty bomb" into a probable and plausible terrorist action. By weaving these two lines of research together I will arrive at a final product.