The Container And The Contained: Functional Preservation Of Historic Food Markets 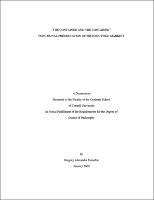 The Container and the Contained explores the motivations, meanings, and methods of functional preservation planning through a case-study examination of three food market districts: Pike Place Market in Seattle, Washington; Faneuil Hall Marketplace in Boston, Massachusetts; and Gansevoort Market, in New York, New York. The functional preservation planning of these districts spanned from the postWorld War II era into the present. Expanding upon the conventional objectives of historic preservation in the United States, with its narrow focus on the retention and restoration of architectural features, the goal of functional preservation is to document, protect, and perpetuate both the forms and the functions of historic resources. Interviews and archival research revealed that individuals involved with each market held a range of motivations for pursuing functional preservation planning. They all expressed a general belief that the historic character of cultural resources, however defined, was a manifestation of more than just architectural fabric. It also stems in part from how they are used, and by whom. Those who pursued functional preservation utilized a broad array of methods and tools to bring their plans to fruition, including not only established strategies like historic district designation and design review, but also novel approaches such as the regulation of building uses and oversight of market vendor products and sales techniques. Their efforts are set against the broader background of federal, state, and local market planning ideologies that evolved over the course of the twentieth century. Lastly, sources of data and quantitative methods of measuring the degree of functional preservation planning's success and failure are proposed.