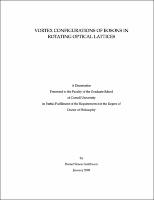 Atomic clouds in a rotating optical lattice are at the intellectual intersection of several major paradigms of condensed matter physics. An optical lattice simulates the periodic potential ubiquitous in solid state physics, while rotation probes the superfluid character of these cold atomic gases by driving the formation of quantized vortices. Here we explore the theory of vortices in an optical lattice. We first provide a detailed introduction section aimed at providing the reader with the information necessary to understand and appreciate the research presented in later chapters. Next we study an infinite square lattice configuration of vortices in a rotating optical lattice near the superfluid-Mott-insulator transition. We find a series of abrupt structural phase transitions where vortices are pinned with their cores only on plaquettes or only on sites. We discuss connections between these vortex structures and the Hofstadter-butterfly spectrum of free particles on a rotating lattice. We then investigate vortex configurations within a harmonically trapped Bose-Einstein condensate in a rotating optical lattice. We find that proximity to the Mott insulating state dramatically affects the vortex structures. To illustrate we give examples in which the vortices: (i) all sit at a fixed distance from the center of the trap, forming a ring, or (ii) coalesce at the center of the trap, forming a giant vortex. We model time-of-flight expansion to demonstrate the experimental observability of our predictions. Finally for a trapped gas far from the Mott regime, the competition between vortex-vortex interactions and pinning to the optical lattice results in a complicated energy landscape, which leads to hysteretic evolution. The qualitative structure of the vortex configurations depends on the commensurability between the vortex density and the site density - with regular lattices when these are commensurate, and concentric rings when they are not. Again we model the imaging of these structures by calculating time-of-flight column densities. As in the absence of the optical lattice, the vortices are much more easily observed in a time-of-flight image than in-situ.