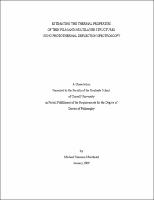 Photothermal deflection spectroscopy (PDS) is an experimental technique which may be used to determine the thermal properties of materials. An intensity modulated heating laser is used to generate periodic thermal waves in the material and the surrounding gas phase. A probe laser is passed through the gas phase above the material and experiences periodic deflections due to the temperature dependence of the refractive index. This is commonly referred to as the mirage effect. We have developed a model which allows for the calculation of the thermal field in a multilayer structure resulting from periodic laser heating. The model incorporates the effects of anisotropic thermal conductivity, interlayer thermal contact resistance, and volumetric optical-to-thermal energy conversion. temperature field is used to calculate the optical probe beam deflections. A maximum a posteriori parameter estimation algorithm has been developed which allows for the determination of model parameters from experimental PDS measurements. This algorithm has the capability of accounting for a priori parameter information in the event that it may be known from prior measurements. Special attention is paid to the cases where the model may be insensitive to certain parameters or where linear combinations of parameters may exist. Experiments were performed on bulk NIST standard references materials, including electrolytic iron (SRM8421) and stainless steel (SRM1462). The thermal conductivity of these materials was recovered from the estimation algorithm to within a reasonable accuracy. This data was also used to extract the thermal conductivity of a "virtual film" atop the otherwise bulk material. We determined that for virtual film thicknesses larger than the thermal penetration depth, the algorithm was successfully able to determine the thermal conductivity. For thicknesses significantly less than the thermal penetration depth, however, the algorithm loses sensitivity to the properties of the film. Experiments were also performed on a series of W/B4C multilayer materials used as X-ray monochromator mirrors at Cornell's High Energy Synchrotron Source (CHESS). Although we were unable to resolve the thermal properties of the individual layers, the effective thermal conductivity of the multilayer was found to be significantly less than either of its constituent bulk materials. We also found that there is a lack of sensitivity to the degree of anisotropy within the multilayer, thus we are only able to quote a cross-plane value for thermal conductivity.