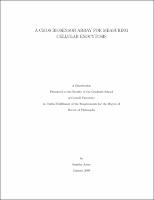 Release of neurotransmitters and hormones from secretory vesicles plays a fundamental role in the function of the nervous system including neuronal communication. High-throughput testing of drugs modulating transmitter release is becoming an increasingly important area in the fields of cell biology, neurobiology, and neurology. In this thesis, I will describe the design and operation of a novel CMOS potentiostat circuit that is capable of measuring transient amperometric oxidation currents at the surface of an electrode with submillisecond time resolution and picoampere current resolution. In designing an array of such potentiostats, a shared amplifier scheme is employed, reducing the layout area of each unit in half, enabling high density and improved spatial resolution. In order to perform electrochemical experiments on the CMOS chip, an on-chip transducer was required. I will describe two post-CMOS fabrication methods to incorporate the electrochemical transducer material. I will present results from various experiments, that prove the feasibility of on-chip electrochemical measurements of dopamine, and catecholamine release from live adrenal chromafin cells with sub-picoampere current resolution and sub-millisecond time resolution. I will also present system-level architecture of a high-throughput biosensor array that is capable of monitoring catecholamine release at a rate hundred times faster than the existing technology, and at one-tenth the cost.