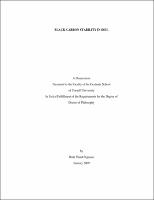 Black carbon (BC) is the residue from incomplete combustion of biomass and is an important soil C pool. Its role, as a soil C pool and as a potential approach to actively sequestering atmospheric CO2, greatly depends on its stability, which is likely controlled by environmental conditions, in addition to its intrinsic chemical properties. This dissertation has three research chapters, investigating changes in quantity and quality of BC (i) over decadal time period in cultivated soil; (ii) over an annual time scale as affected by water regimes, or (iii) temperature. The first chapter investigates long term BC dynamics in cultivated soil, which had been converted to maize cultivation for 100 years. Within the first 30 year since deposition to soil, BC concentrations decreased rapidly, and reached a steady state. Oxidation of BC occurred during the same period of time, which was restricted to its surfaces. The second chapter quantifies BC stability under varying water regimes. Four BC types, produced by charring corn residue or oak wood at either 350 or 600 degree C, were incubated at 30 degree C under aerobic, waterlogged and alternating aerobicwaterlogged conditions. BC mineralization, 6-21% for the first year, was significantly greater under aerobic and alternating aerobic-waterlogged conditions than waterlogged conditions. However, these effects of water regime significantly depended on the BC type. BC produced from corn at 350 degree C showed the greatest C loss and change in properties during aerobic condition, whereas BC produced from oak at 600 degree C mineralized to a much lower extent during the 1-year incubation. The third chapter focuses on temperature sensitivity of decomposition of the aforementioned four BC materials. In response to increase in incubation temperature, the more stable BC types, such as oak-BC produced at 600 degree C, were more sensitive to decomposition than the more labile materials, such as corn-BC formed at 350 degree C. The temperature coefficient (Q10) decreased with increasing incubation temperature, and ranged from 1.01-5.79. Mineralization of BC in all three studies were greatly coupled with changes in BC quality, such as molecular chemical functional group chemistry, OH, C=O and aliphatic C-H, and closely related to its initial properties, such as nano- and microstructure as well as mineral content.