Integrated And Organic Production Of 'Liberty' Apple: Two Agroecosystems From The Ground Up 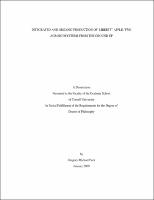 An orchard of disease-resistant 'Liberty'/'M.9' apple (Malus - domestica Borkh.) trees, during and after the transition from conventional to integrated (IFP) and organic fruit production (OFP) was investigated. Over four years, cumulative yields and tree growth were similar in both systems. IFP apples had from 3-17% total cumulative damage (internal and cosmetic), while OFP apples had 3-75% damage. Organic fruit had more cosmetic blemishes. The Environmental Impact Quotient model estimated 79-88% greater negative impact in OFP, largely due to the application of liquid lime sulfur, fish oil, and kaolin clay. Partial budgets estimated 9% greater variable expenses for OFP. Sales values for IFP were estimated at 3% greater with direct market prices and 16% greater with wholesale prices. At harvest, fruit quality indicators, and total phenolic concentrations and antioxidant capacity, were similar between IFP and OFP fruit. In triangle taste tests, consumer panelists were able to discriminate between treatments, but in hedonic and intensity tests, panelists did not consistently rate one treatment more highly than the other. In 2006, panelists rated fruit appearance of OFP apples as less acceptable than IFP. In 2007 after fruit were stored for 9 weeks, organic apples were firmer and had higher SSC, TA and SSC:TA ratios. The mulch-herbicide system used in IFP provided effective weed control while increasing soil organic matter, soil nutrient status, and microbial biomass and respiration rates. The cultivation-chicken manure compost system used in OFP increased soil porosity, mineralizable nitrogen and total inorganic nitrogen, and decreased aggregate stability. Minimal differences were found between treatments in the lower soil depth. In the upper soil depth, bacterial communities were highly influenced by sampling time; the two treatments had different communities by the last observation. Fungal communities in the upper depth were distinct by the third sampling date. Four years of evaluation suggest that IFP could be widely implemented in the Northeastern US, but the current lack of market incentives might impede its adoption. In OFP, producing apples with disease-resistant cultivars showed potential, especially for direct market operations, but a price premium would be necessary to offset greater production costs.