Microreactors And Microcapsules As Approaches To Multicatalyst Systems 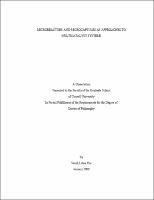 This dissertation discusses the use of microreactors and microcapsules in the context of multicatalyst systems. The first two chapters focus on organic synthesis in microfluidic devices, whose modular design offers the possibility for performing sequential reactions in flow. In the first example, the unique behavior of fluids at small dimensions was taken advantage of in order to prevent solid products from clogging the microfluidic channels. By performing reactions in dispersed droplets surrounded by a carrier phase, the precipitated products were kept away from the channel walls, preventing channel clogging. The second chapter describes the synthesis of ibuprofen and atropine as multi-step syntheses in flow. In addition to the successful synthesis of both of these products, this project resulted in the development of a solid-supported reagent that has the potential to enable multi-step synthesis in flow. The second focus of this work involves microencapsulated catalysts. The theory behind this approach is that the encapsulation of large polymeric catalysts within polymer shells would prevent catalysts from interacting with each other, allowing for the use of multiple catalysts in one reaction vessel. The synthesis of a microencapsulated polyamine catalyst is described, and the development of a twostep, one-pot reaction is discussed. This multistep reaction, consisting of nitroalkene formation and a Michael reaction, produces gamma-amino acid precursors that cannot be obtained if the polyamine catalyst in not encapsulated. In addition to catalyzing nitroalkene formation, the microencapsulated catalyst was found to enhance the rate of the Michael addition. Initially attributed to the ureas of the polyurea capsule, it was discovered that the rate enhancement was due to the amine groups. However, a small molecule bifunctional urea was developed that was found to provide rate enhancement for the proline-catalyzed alpha-aminoxylation of aldehydes. Experimental evidence suggests that the origin of the rate enhancement is due to interaction between the urea and an oxazolidinone and may be general for other proline-catalyzed reactions involving aldehydes.