The Role Of Growth Hormone And Its Mediator Insulin-Like Growth Factor-I In Growth, Metabolism, And Mammary Development 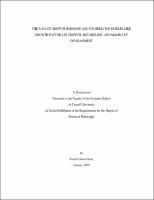 The somatotropic axis is one of the major hormonal systems regulating growth, development, and metabolism. Growth hormone (GH) can act directly on target tissues or indirectly by stimulating insulin-like growth factor (IGF-I) through the JAK2-Stat5 pathway. The first objective of this dissertation was to test whether exogenous GH could stimulate growth, development, and insulin resistance in the absence of functional Stat5 proteins. Wild type (WT) and Stat5 mutant (Stat5 exp(delta-N)) mice were treated with exogenous GH for 4 weeks. Stat5 exp(delta-N) mice grew at a slower rate and had lower hepatic IGF-I expression and plasma IGF-I than WT animals. GH stimulated growth in WT animals but had absolutely no effect in Stat5 exp(delta-N) mice. GH increased hepatic IGF-I expression and plasma IGF-I in WT mice but failed to do so in Stat5 exp(delta-N) mice. GH-stimulated IGF-I expression also occurred in the muscle and adipose of WT mice only. GH-treated Stat5 exp(delta-N) mice were protected from GH-induced insulin resistance. This protection was associated with lack of GH-stimulated expression of p85-alpha mRNA in insulin sensitive tissues. GH plays a critical role in mammary development through its modulation of mammary production of IGF-I and IGF binding proteins (IGFBPs). One component of the IGF system that has not been studied in mammary development is the acid labile subunit (ALS). ALS is thought to function exclusively by forming ternary complexes with IGF-I and IGFBP-3 or -5 to build a reservoir of circulating IGF-I. The second objective was to evaluate the role of ALS in mammary gland development using null ALS mice. Null ALS mice had three specific mammary defects, namely delayed ductal elongation, impaired ductal branching in early pregnancy, and delayed involution following lactation. In contrast, mammary development during late ALS mRNA was pregnancy and lactation appeared normal in null ALS mice. detected in the mouse mammary gland, and levels of expression were comparable to liver during pregnancy, lactation, and involution. Therefore, mammary defects seen in null ALS mice cannot be attributed solely to disruption of the circulating IGF system and could relate partly to local ALS expression.