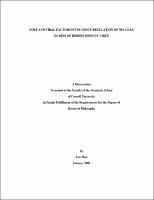 The nascent nucleocapsids of Herpes Simplex Virus (HSV) egress from the infected cell nuclei by budding at the inner nuclear membrane (INM), and become enveloped primary virions in the perinuclear space. The envelope then fuses with the outer nuclear membrane (ONM) and the capsids are released into the cytosol, where they acquire tegument proteins and the final envelope at the trans-Golgi network and are delivered to the extracelluar space via secretory vesicles. This complicated process involves interactions between both viral and host factors. The products of viral UL31 and UL34 genes form a complex on the INM that is essential to initiate the primary envelopment reaction. The proper positioning of this complex requires a kinase encoded by the viral US3 gene. In the absence of pUS3 kinase activity, pUL31/pUL34 complexes aggregate on the nuclear rim and perinuclear virions accumulate within invaginations of the INM. I discovered that the nuclear lamina was dramatically perforated near those pUL31/pUL34 aggregations, and identified lamin A/C as a putative substrate of US3 kinase in vitro. The kinase activity was found to be sufficient to induce partial dissolution of lamin A/C from permeabilized cell nuclei. Two-dimensional electrophoretic analyses confirmed that lamin A/C was phosphorylated in HSV-infected cells, and the optimal phosphorylation required US3 kinase activity. These data suggest that US3 kinase activity regulates HSV-1 capsid nuclear egress at least in part by phosphorylation of lamin A/C. Lamins A/C and B1 were shown to interact with pUL34. To determine the roles of these interactions on viral infectivity and pUL34 targeting, the localization of pUL34 was examined in lamin knockout mouse embryonic fibroblasts (MEFs) in the presence or absence of pUS3 kinase activity. It was determined that both lamin proteins directly or indirectly modified pUL34 distribution but neither was required for its INM targeting during viral infection. The elimination of lamin B1 made cells less permissive for viral replication, whereas lamin A/C was dispensable for viral infection. Furthermore, in cells infected by the US3 defective virus, the lack of lamin A/C precluded accumulation of perinuclear virions and partially restored replication of this virus. These observations reveal different roles of specific lamins in HSV infection, suggesting that lamin A/C normally impedes viral nuclear egress and that US3 kinase helps alleviate this impediment, whereas lamin B1 is necessary for efficient viral replication, probably through its effects on many cellular signaling pathways. pUL31, the binding partner of pUL34, is also a substrate of pUS3. The N-terminus of pUL31 was found to be critical for the protein?s normal function and contains multiple phosphorylation sites for US3 kinase. The phosphorylation was not essential for productive infection, but was necessary for optimal viral growth kinetics. Phosphorylation-deficient pUL31 caused pUL31/pUL34 complex aggregation as well as perinuclear virion accumulation, similar to the phenotype caused by abolishing US3 kinase activity. Mimicking phosphorylation of pUL31 by replacement of phosphorylated residues with glutamic acid largely restored the smooth distribution of pUL34/pUL31, and precluded the perinuclear virion herniations, regardless of US3 kinase activity. However, the pseudo-phosphorylated protein hindered the primary envelopment of capsids. These results indicate that pUL31 phosphorylation is a dynamic event, which mediates pUS3 regulatory functions in both primary envelopment of nucleocapsids and subsequent de-envelopment of perinuclear virions.