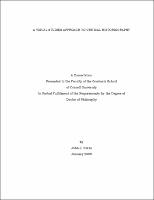 This dissertation asserts that critical historiography, a term first used by Stefan Berger and later by Mark Jarzombek, is worthy of extensive development as a discourse. Furthermore, it calls for both intra- and interdisciplinary research regarding the meaning, relevance, and application of critical historiography and its methods. Though post-structural approaches to historiography have afforded attention to the literary construction of written historical narratives, they have all but ignored Derrida's caution against the suppression of writing to rhetoric, which reduces writing to speech's graphic representation. My study restores the place of writing qua writing to historiography, a position, I insist, that is underscored - actually necessitated - by its etymology. While interest in historical narrative during the 1970s, 80s and 90s began an important chapter in postmodern historiography, my dissertation indicates that this was only an initial foray; these approaches neglected its written or inscribed telos. Rather than the study of tropes, which remains largely indifferent to writing's supplemental status, I look to written operations within historiography, drawing on Greimassian semiotics. I conduct an investigation of the effects of two operations on historical writing, one which centers on the inscription of charismatic authority, the other on the operation of ekphrasis within historical description.