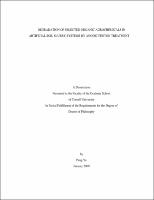 This thesis investigated the application of anodic Fenton treatment to the degradation of several probe agrochemicals in model soil slurry systems. A kinetic model, called the slurry AFT model, was developed to describe the degradation process in the slurry system. Effects of different model soil components, such as humic acid, kaolin or montmorillonite clay, and goethite, on the degradation of different groups of agrochemicals, including carbaryl, mecoprop, paraquat, 4.6-odinitrocresol, p-nitrophenol and dinoseb, were studied. The results indicate that humic acid content is the key factor that slows down pesticide degradation, most probably due to its pH buffering and adsorption capacity. A kinetic model, which was shown to fit the experimental data quite well (R2>0.99), was developed to describe the carbaryl degradation in the soil slurry during the AFT process. In the presence of humic acid, carbaryl degradation kinetics were found to shift to a pseudo-first order reaction after an 'initiation' stage. The adsorption and degradation behaviors of neutral (carbaryl), anionic (mecoprop) and cationic (paraquat) agrochemicals were studied in a slurry of Swy-2 Na+montmorillonite clay. Results show that, due to different adsorption mechanisms, the adsorption effect on chemical degradation by anodic Fenton treatment (AFT) varies with pesticide: strong and tight adsorption of paraquat at the clay interlayer protects paraquat from being attacked by hydroxyl radicals; loosely adsorbed carbaryl or mecoprop is readily degraded. XRD analysis clearly indicates that AFT is capable of effectively degrading interlayer non-cationic organic chemicals that are not usually available for biodegradation. The adsorption and degradation of 4, 6-o-dinitrocresol (DNOC) and p-nitrophenol (PNP) in Swy-2 montmorillonite clay slurry were investigated. The pH and type of cation were varied, and results showed that adsorption of DNOC and PNP increased at lower pH values. The specific cation had a significant effect on adsorption, which was dramatically enhanced in the presence of K+ and NH4+. It was found that the DNOC degradation rate substantially decreased in the clay slurry system in the presence of K+ and low pH, with a large amount of DNOC residue remaining after 60 min treatment. Based on LC-MS data, a DNOC degradation pathway was proposed. Overall, the results showed the inhibition effect of specific adsorption mechanisms on the degradation of nitroaromatic compounds in montmorillonite clay slurry by AFT, providing important implications for water and soil remediation. The pH effect on the adsorption and AFT degradation of dinoseb in a goethite slurry was investigated. At neutral or high pH, there was less dinoseb adsorption on goethite, and the AFT degradation process was not significantly affected. At an acidic or low pH, there was much more dinoseb adsorption on the goethite, and the AFT degradation process was inhibited by the adsorption, though more soluble iron originated from goethite which could enhance the degradation. It was also found that goethite itself was able to remove 50% of dinoseb in the presence of hydrogen peroxide in 30 minutes in an acidic environment.