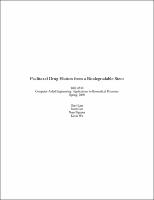 Recently, drug-eluting stents have become a common treatment for coronary heart disease. These stents are usually loaded with a drug that prevents restenosis. Unfortunately, there are risks associated with the placement of these metallic structures in the body. Stent thrombosis is one such problem, and can lead to restenosis despite the presence of drug. Advances in biomaterials have led to the development of biodegradable stents, which can reduce the risks associated with stents. However, since it is a relatively new technology, it is not known to what degree the biodegradability affects the drug releasing properties of the stent. We hope to characterize these effects and to determine if the biodegradability reduces the efficacy of the stent when compared to normal non-degradable stents. To accomplish this, we modeled a stent that diminished in size over time using COMSOL Multiphysics, and monitored the drug concentration in the nearby tissue. We established that our model was a viable predictor of actual stent behavior by comparing our simulated results with previous studies. We were then able to determine the optimal initial loading stent concentration of our modeled drug, paclitaxel, to ensure therapeutic levels in the tissue. Lastly, we found that drug concentrations in the tissue were not substantially different between the degradable and non-degradable models. This affirms the effectiveness of using biodegradable stents, showing them as a viable alternative to traditional metal stents.