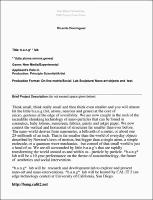 Think small, think really small and then think even smaller and you will almost hit the little b.a.n.g (bit, atoms, neurons and genes) at the core of micro_gestures at the edge of invisibility. We are now caught in the rush of the incredible shrinking technology of nano-particles that can be found in cosmetics, baby lotions, sunscreen, fabrics, paints and inkjet paper. We now control the vertical and horizontal of structures far smaller than ever before. The nano-world derives from nanometer, a billionth of a meter, or about one 25-millionth of an inch. That is far smaller than the world of everyday objects described by Newton's laws of motion, but bigger than a single atom, a simple molecule, or a quantum wave mechanics.- but control of that small world is just a head of us. We are all surrounded by little b.a.n.g's that are rapidly transforming the world around us and within us - particle by particle. *b.a.n.g* lab will be a 10 year performance on the theme of nanotechnology, the future of aesthetics and social intervention.