Facing Time and Other Thieves: Meaning as Freedom in Joni Mitchell's Hejira 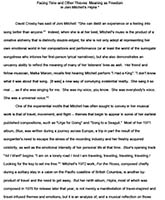 David Crosby has said of Joni Mitchell: "She can distill an experience or a feeling into song better than anyone". Indeed, when she is at her best, Mitchell's music is the product of a creative alchemy that is distinctly double-edged, for she is not only adept at representing her own emotional world in her compositions and performance, but she demonstrates an uncanny ability to reflect the meaning of her listeners' lives as well. In this paper, I examine a particular instance of this phenomenon in Mitchell's 1976 recording, Hejira. Composed almost entirely during a solo, cross-country drive across the United States, Hejira is an album heavily infused with themes of escape, freedom, travel, and flight. These subjects were hardly new to Mitchell by the mid-seventies, for she had explored the need for psychological and emotional journeying since the early days of her career in tunes such as "Urge for Going" and "Song to a Seagull." In Hejira, however, Mitchell devotes an entire project to the very meaning of escape and flight, and through it she succeeds in creating for both herself and her listeners a kind of universal philosophical framework that is unusually poetic and cerebral. While not for everyone, the lyrics, rhythms and harmonies of this transitional album in Mitchell's career communicate exceptionally well the existential quest that we all face throughout our lives. Through an analysis of the musicality and poetry of this CD, and drawing on the work of Friedrich Nietzsche, I hope to present a new perspective on Joni Mitchell's Hejira and the meaning its music conveys.