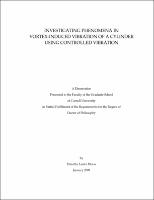 In this study, we use controlled vibration, where we oscillate a rigid cylinder with a prescribed motion, in a fluid flow, in order to provide insight into aspects of vortex-induced vibration. We make extensive measurements of the fluid forces on a cylinder that oscillates sinusoidally, transverse to a free stream, at both Re = 4,000 and Re = 12,000, and generate high resolution contour plots of various fluid forcing quantities in the plane of normalized amplitude and wavelength. With such resolution, we are able to discover discontinuities in the force and phase contours, which enable us to clearly identify boundaries separating different fluid forcing regimes. These boundaries appear remarkably similar to boundaries separating different vortex formation modes in the Williamson & Roshko (1988) map of regimes. Wake vorticity measurements (using DPIV) exhibit the 2S, 2P, and P+S modes, as well as a regime where the vortex formation is not synchronized with the cylinder oscillation. A further new discovery is the existence of a region where two vortex formation regimes overlap. Associated with this overlap region, we identify a distinct mode of vortex formation where two pairs of vortices are shed per cycle of oscillation (similar to the 2P mode) but the secondary vortex is much weaker, which we have termed '2Poverlap', or simply the '2Po' mode. This 2Po mode is of particular importance, as it is responsible for generating the peak resonant response of the body. By examining the energy transfer from fluid to body motion we predict the response of an elastically mounted cylinder that agrees remarkably well with measured free vibration responses. We introduce the concept of an "energy portrait", which allows us to identify stable and unstable amplitude response solutions and thus to predict clearly the hysteretic and intermittent switching mode transitions, both of which correspond with such phenomena measured from free vibration. In addition to predicting steady state (sinusoidal) behavior, we develop a quasi-steady model which allows us to predict the dynamics of a freely oscillating cylinder having transient or unsteady behavior. Using this model, we find a regime of normalized flow velocity where steady state vortex-induced vibrations cannot occur, and the cylinder can only oscillate with unsteady motion. Further studies include the effect of Reynolds number on the critical mass for an oscillating body, below which a structure will vibrate up to infinite normalized velocity. Finally, we measure the effect of spanwise end conditions on a free vibration response.