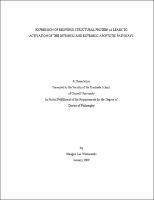 Mammalian orthoreoviruses (reoviruses) induce apoptosis in vitro and in vivo. The capacity to induce apoptosis differs among strains of reovirus, and in infected L-cells the Type 3 Dearing (T3D) strain induces apoptosis to a greater extent than the Type 1 Lang (T1L) strain. Studies utilizing reassortant viruses mapped the capacity to induce apoptosis to the M2 genome segment which encodes the outer capsid protein mu1. Here, I describe a strain difference in the subcellular distribution of mu1 in reovirus-infected cells. Using a panel of reassortant viruses, I mapped this difference in distribution of mu1 in infected cells to the M2 genome segment. In vitro studies have shown that in HEK 293 reovirus-infected cells, the extrinsic apoptotic pathway is activated with subsequent activation of the intrinsic apoptotic pathway. Here, I describe the optimization of flow cytometric protocols to monitor activation of apoptotic pathways in cells and to detect expression of mu1 in transiently transfected cells. Using these protocols, I was able to evaluate cytochrome c release from mitochondria, activation of caspases, and permeabilization of the cellular membrane in cells expressing mu1. My data indicates that mu1 induces apoptosis by activating the intrinsic and extrinsic apoptotic pathways. However, inhibition of caspase activation does not prevent cytochrome c release in mu1-expressing cells. Additionally, I found that caspase activation influences the steady-state levels of mu1. I also found that mu1 expression permeabilized the plasma membrane, yet the mitochondrial membrane potential remains intact. To better understand the capacity of mu1 to permeabilize membranes, I utilized Bax-/-Bak-/- double knockout mouse embryonic fibroblasts. Infection with reovirus strain T3DN caused release of cytochrome c from mitochondria in the double knockout cells. Also, expression of mu1 in double knockout cells resulted in cytochrome c release from the mitochondria. My data confirm the capacity of mu1 to induce apoptosis when expressed in cells and addresses the apoptotic pathways and cellular changes that are a consequence of mu1 expression. This study lends further support that mu1 is the reovirus protein responsible for inducing apoptosis in infected cells.