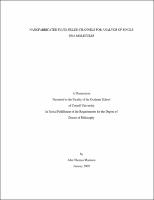 Nanofabricated, fluid filled channels are presented as tools for the manipulation and detection of single DNA molecules. Both the conformation and position of DNA molecules within such devices can be controlled using a combination of electrophoretic and entropic forces. Application of these forces allows for fluorescently labeled molecules to be stretched in the channel, visualized using fluorescence microscopy, and analyzed in a number of ways, providing valuable and biologically relevant information about a DNA sample. In addition to investigating fluorescence microscopy as a means for sensing molecules in the channel, the possibility of electrical detection is explored. To this end, a fabrication method is described which allows for the integration of single walled carbon nanotube sensors and nanofluidic channels. While this device is currently being tested, it is intended that the incorporated carbon nanotubes may be used in a field effect transistor mode with the goal of detecting perturbations in local solution potential caused by DNA molecules as they are driven through the channels.