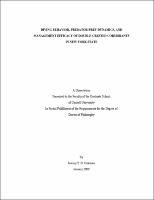 The potential for a rapidly growing double-crested cormorant population to negatively impact fish populations and public resources in North America has focused attention on the feeding ecology and management of this federally protected species. Questions persist regarding the nature of cormorant-fish interactions and the propensity for cormorants to impact fish at the population level. From 1998 to 2003, we conducted research and participated in a management program at Oneida Lake, New York, that incorporated nest control and fall hazing to reduce cormorant populations on the lake. We examined: 1) the behavioral response of cormorants to the management program, 2) cormorant prey selectivity, 3) the impact of varying cormorant predation pressures on walleye and yellow perch populations, and 4) daily cormorant activity patterns and underwater foraging habits at Oneida Lake compared to other colonies in New York. I used radio telemetry and weekly counts to reveal that fall hazing moved cormorants off of Oneida Lake, reducing the September population annually by approximately 95% of the 1997 level. Most displaced cormorants relocated to nearby Onondaga Lake rather than leaving the region. Diets examined between 1994 and 2003 consisted of 27 different species, but walleye and yellow perch comprised 58-72% by weight annually. I used the relativized electivity index (E*) to determine that cormorants selected age 1-3 walleye, and age 2-4 yellow perch, with peak selectivity for age-2 walleye and age-3 yellow perch. A comparison of the electivity values revealed that fish girth (max. circumference) is the main determinant of the maximum size of fish that cormorants consume. The cormorant control program resulted in a mean reduction in predation pressure on fish populations of approximately 47% from the 1997 level in 1998-2005, which coincided with an increase in abundance of the adult populations of both walleye and yellow perch. Yellow perch survival increased from age-1 to age-3, and walleye survival increased from age-1 to age-4 during this time of predator reduction. Time-depth recorders deployed on cormorants from Oneida Lake, Lake Ontario, and Lake Champlain reveal differences in depth utilization but no disparity in the total time spent diving.