Symphonic Texts and the Cultural Ideology of Mahler's Lieder 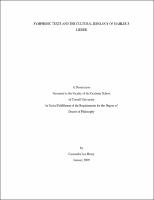 Although Gustav Mahler has long been considered a crucial figure in the cultural world of the fin-de-siecle, the exact nature of his involvement in the social, political, and cultural philosophies of the era has remained largely undefined. The student radicalism of his youth has been taken as a leitmotif for the social and political activity of his entire life, while his compositions have been viewed as entirely separate from his biography, with most scholarship focusing on their place in the musical canon. This dissertation attempts to rectify the misplaced scholarly emphasis by examining Mahler's vocal works in the context of their relationship to his social, political, and cultural thought. As Mahler used both the genre categorization of his music and the texts of his works as statements of his philosophy, my analysis focuses primarily on those pieces which evince significant change in these areas, namely Mahler's songs and song-cycles - the Wunderhorn songs, the Kindertotenlieder, and Das Lied von der Erde - and his Eighth and Third Symphonies. Preliminary to this is a discussion of Mahler's political, social, and cultural philosophies as concern his compositional and literary output, as well as an investigation of the changing definitions of the genres of song-cycle and symphony at the turn of the century and the role that Mahler played in such a metamorphosis. Through an examination of the texts of these central works in Mahler's oeuvre, this study also seeks to locate Mahler within the political and social ideologies of his time, as one who was fully engaged in discussion with the dominant philosophical and aesthetic trends. Through his textual selection and editing, as well as the organization of his vocal compositions, Mahler offers indirect commentary on his social, political, and cultural milieu; the extraction of these commentaries is critical to situating the composer within the framework of his time. Mahler, as his works make clear, was neither a member of the aesthetic revolutionaries that comprised such groups as the Secession, but neither was he convinced by the conservative aesthetic tastes of the liberal bourgeoisie who sought in art a justification for their social existence. Rather, Mahler belonged to a more moderate camp, and sought through his works to remain culturally relevant and to make both social and cultural commentary that was simultaneously grounded and forward-looking.